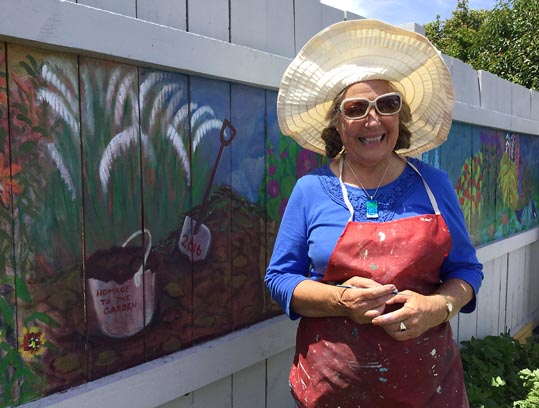 Residents of Opotiki’s Rangimarie Trust have painted a beautiful Rousseau-style mural to welcome visitors to the Richard Street complex.

They’ve joined forces with artist Shona Hammond Boys whose artistic skills and boundless enthusiasm have been at the heart of many community projects over the years.
The mural on the fence bordering the car park provides a cheerful greeting and, on completion, will be complemented by a garden beneath.

The Rangimarie Trust was established by long-term Opotiki residents Jane and Jim Jackman, Jopie Hofland and Margaret Haase more than 30 years ago. Concerned about the shortage of quality low-cost rental homes in the town for those on low fixed incomes, they formed a trust and began fundraising.

They bought their Richard Street section in 1971 and the first dwellings were completed in 1979. The trust now has 12 units housing mainly pensioners but also some younger people with special circumstances.

The mural project has been endorsed by the trust and with a $200 gift of paint and Shona’s energy and talents, has quickly evolved over a series of Saturday morning painting bees.

“There is ownership in this and joy and pride,” Shona says. “It has been a learning curve for residents, a lot more goes into a work of this scale than they imagined – preparation, drying, planning the design and layering of paint.”

Pansies, calla lilies, tiger lilies, grape hyacinths, arum lilies, delphiniums and tulips are just a few of the flowers in the mural. Helga Bidlake, a resident for six years, is originally from Holland, hence the tulips.

She’s been crucial to the project, even though she’s allergic to paint, taking on the role of resident coffee maker and keeper of the beautiful garden that has served as a reference point.

Donna Neria, a resident of two years, says she “colours-in”, as Shona brings the artwork to life. “Shona put the pukekos in because I collect them, and my cat Gin Gin.”

Shona says Steve, a resident and competent painter, will be working on the final stages.

“Steve is a very good artist but his work is so fine; he is going to do the finishing work and clean up all around the edges.”

A new garden in front of the fence will eventually mirror the mural with residents saying it is a waste of time to have a beautiful mural if the garden is not fixed up.